Language, Cognition, and Neuroscience just published Esteban Buz​’s paper on the relation between the time course of lexical planning  and the detail of articulation (as hypothesized by production ease accounts).

Several recent proposals hold that much if not all of explainable pronunciation variation (variation in the realization of a word) can be reduced to effects on the ease of lexical planning. Such production ease accounts have been proposed, for example, for effects of frequency, predictability, givenness, or phonological overlap to recently produced words on the articulation of a word. According to these account, these effects on articulation are mediated through parallel effects on the time course of lexical planning (e.g., recent research by Jennifer Arnold, Jason Kahn, Duane Watson, and others; see references in paper). 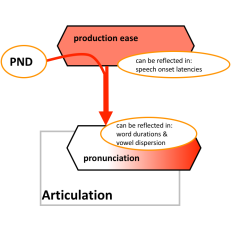 1B: Production ease account that allows independent effects of lexical variables on articulation that are not mediated through production ease

This would indeed offer a parsimonious explanation of pronunciation variation. However, the critical test for this claim is a mediation analysis, testing whether any effects on articulation are indeed mediated through effects on the time course of lexical planning. Those tests have so far been lacking (except for Munson, 2007). The paper linked above does perform such a mediation analysis for the effect of phonological neighborhood density on both the time course of lexical planning and pronunciation (specifically, word duration and vowel dispersion).

Compatible with the commonly assumed link between production ease and articulation, we find that speech onset latencies indeed explain variance in pronunciation duration. However, phonological neighborhood density effects on articulation–although also observed for speech onset latencies–are not mediated by through production ease. In fact, they are almost completely orthogonal to the effects of production ease (see Munson, 2007, for similar results). That is, our result support the account described in the (larger) Figure 1C.

This calls into question one of the central assumption underlying increasingly common arguments for production ease accounts of pronunciation variation: just because variable A affects both production planning (e.g., in terms of speech onset latencies) and articulation (e.g., in terms of word duration), it does not follow that the latter effect is mediated through the former. This also means that there is as of yet no evidence in support of radical production ease accounts, despite the fact that they are frequently taken as the implicit null hypothesis against which other accounts of pronunciation variation are compared. Specifically, the argument I have seen in a few paper (or talks at CUNY) is something along the lines of “this can already be explained by production ease, so we shouldn’t take it as evidence for audience design”–arguments like this are valid only to the extent that there is evidence that the specific effect under discussion is indeed mediated through production ease.

It is an open question what mediation analyses like the one conducted in our paper would tell us about effects of frequency, predictability, givenness etc. on pronunciation (see, e.g., Munson, 2007 for an interesting asymmetry between frequency and phonological neighborhood density effects in this regard; to the best of our knowledge the only paper that directly speaks to this question).

In any case, the only papers that have directly tested the mediation assumption underlying production ease accounts (Munson, 2007 and the current paper) do not find it supported. This should be enough to warrant further tests of this assumption before we continue to make it.